Civil Service Head doesn't get it 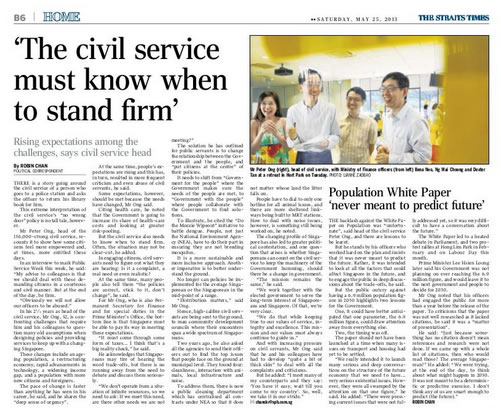 So what does the Admin Service really think about us or more accurately what they want us to think about them in these two articles. I am afraid Peter Ong missed it, lost it. Don't even need to read the main article. Just the subsidiary one on the Population White Paper would do.

They still don't get it. Too much pride to defend and self esteem to preserve. The admin service was simply out of touch with the people. How else could they have gotten it so wrong? Then they blame the world for changing too quickly. I wished they would just blame themselves as that is the only way to begin to do better.

This is the only bit worth reading is at the end of the article. Peter Ong's counterparts consoled him that we are a far easier bunch to serve. Well the civil service leaders and ministers have been taking us for granted for too long. We must never allow them to sell us cheap so easily again. We were sold for a song such that foreigners especially some Chinese can't helped themselves but tell us that we are being stupid to give away so much for nothing. That's why citizens feel second class to foreigners in our own country.

If Peter Ong thinks it is going to get easier, he is sorely mistaken. Doesn't his radars tell him that we are no less angry when we shot the PAP in 2011 and at the PE months later. Don't say it is the politicians' problem. Look at the Punggol East by election results too.

So stop telling us how and what to think. Quit telling us what our priorities should be especially when it practically mean many of us become chambermaids in Hotel Singapore serving well heeled foreigners. Your plans reduce Singaporeans sans the elites into a nation of supplicants. No wonder you cannot be anything else but out of touch. 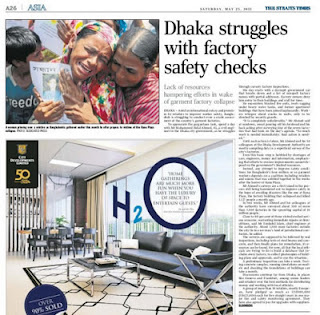 A cursory look suggest there is nothing in common between Bangladesh and us. Theirs is a system riddled with corruption. Ours is governed by the rule of law and corruption is pursued and prosecuted. So what's common? Both sold themselves cheap. They much cheaper. My worry is more with the trend than where we are now. This policy of cutting prices and not trying hard enough to innovate and add value will over time make us poor. In fact it is the most hard working and miserable road to poverty.

We accuse other nations' leaders of kicking the can down the road but we also do the same; only the cans are different.

There is another similarity with every other nation. Our civil service and the PAP rank their interests ahead of the people. They justify themselves that any alternative to them would be worse and rapacious. So they tell us not to complain. But opposition parties whether they are sincere or otherwise could always try to convince people that they put the people ahead of their party interests. They sell a two or multi-party system rather a single dominant party. This is the WP's strategy. Now is the PAP willing to step up to the plate by upping the standard and seize the initiative back from the WP? We shall see in 2016.
Posted by PengYou at 8:07 PM