Hoseki Out; Hoseki In 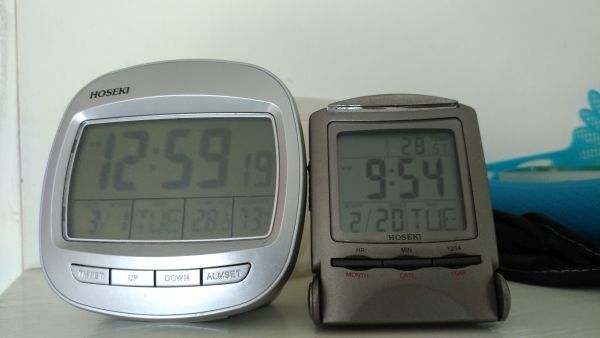 Retiring the Hoseki after 4 years and 2 months with the much smaller one I used to put on my desk. The picture of the two different times explain why one of them must go.
Posted by PengYou at 8:25 AM No comments:

Now I want to record this unusual CNY as quickly as possible.

This morning as I drove out of the car park, I realized it is a school holiday. Traffic on our roads were light. I had to be reminded it is still CNY.

Previous to the last Sunday we had our reunion lunch at my brother's place. For the first time I was late because I forgot to prepare the ang pows for my nephew and niece and had to return home to prepare.

We also have an unusual reunion meal, i.e., it is like any occasional get together makan. We did not have yusheng like every year before. 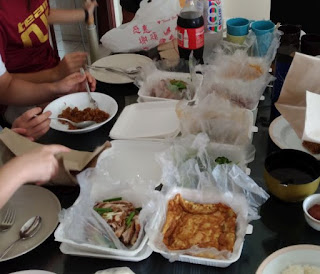 But did we missed anything as a result? No.

I did not prepare ang pows for the children because I was busy. This year I transferred money into their accounts via e-banking. I said which do you prefer? Cash in ang pows which will not be much or direct transfers to their bank accounts. Needless to say more money is better.

The next day we visited our relatives as usual early in the morning before other visitors arrive. This time I gave only one ang pow to my nephew. I remember I used to give out about ten but over the years I gave fewer and fewer as they got married and mostly with no kids yet. 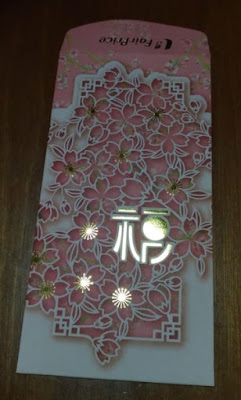 No, we weren't offended. Kinship is stronger than money despite meeting them only at weddings and during CNY. I just felt that I am not alone in caring less about CNY when I saw that I am not alone in being careless. We don't need the traditions and customs to tell us we are family. We have become so practical.

But we might also have become tired and that is something to be concerned.

What would CNY be like next year? I am not thinking about it.

Posted by PengYou at 8:45 AM No comments: 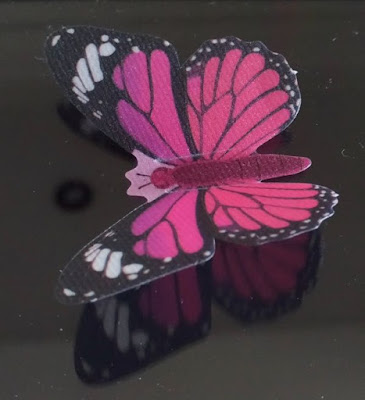 My sis wrote on Whatsapp awhile ago: 15 years already. I replied, "and 1 hour, 7 mins ago"

In the last year callous people have been stealing the little ornaments we placed at my mom's niche. This year I have got for her and my in-laws niche these 3D sticker butterflies from Art Friend.

Death is a thief but it is also a new birth. However stealing little decorations from the resting places of loved ones is an evil act. I told my sibling these miscreants probably just cleaned them up and resell them on Carousell.

This isn't the way I like to remember this 15th year but I can't helped it. Perhaps one day their thievery would become a media story as it is only a matter of time they get caught.
Posted by PengYou at 9:37 AM No comments: 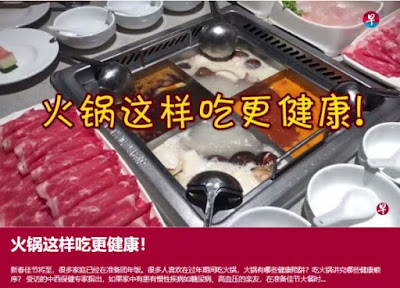 I almost never read about eating less, much less than most of us are already doing. It is always choosing healthier options from the foods to their preparation.

All the advice in the world is useless when one eats too much.
Posted by PengYou at 1:42 PM No comments: 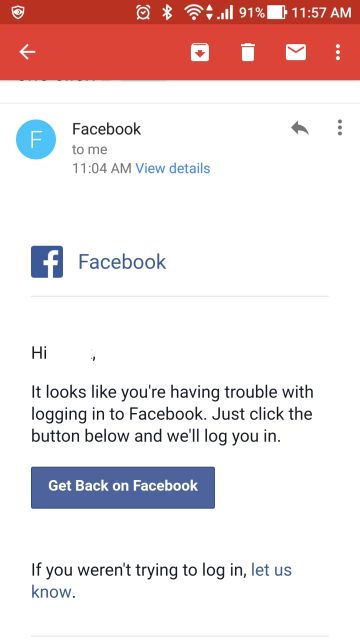 I somehow knew this would come. I have no time to blog, much less for Facebook which I mostly use for reading news and following some news makers and experts.

Some friends distract me with their show offs. It is an air brushed life, I know them too well to know how made up it is.

It is not bad as a birthday reminder but I do not send them birthday greetings over Facebook, instead I use another Facebook property: Whatsapp.

I think the going is going to get tougher for Facebook. Many will discover the hard way it is often a waste of time and it would be a tough challenge for Facebook to keep them.

Google products are more useful and in fact indispensable. Can't imagine how I can get by without Gmail, Google, and Maps. Chrome is also for now the most sensible web browser as well. YouTube often makes sense as well.

I almost forgot Android. That is the soul of my phone.
Posted by PengYou at 1:37 PM No comments:

One box of Bak Kwa and two mandarins 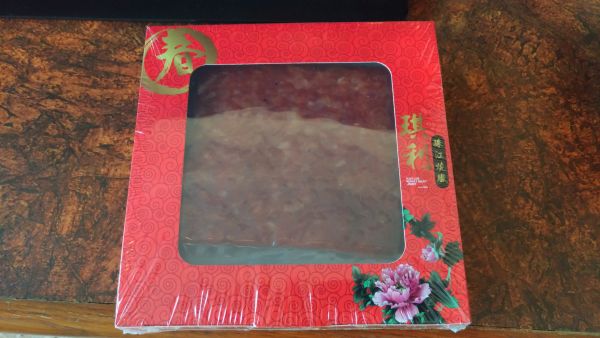 I supposed every Chinese in the office got this and two mandarins yesterday. The meat is seem to be vacuum packed, two slices to a bag and eight packets adding up to 800g. The company got it from Kay Lee, which I supposed was bought by Aztech isn't it?

Well I just google and found this. 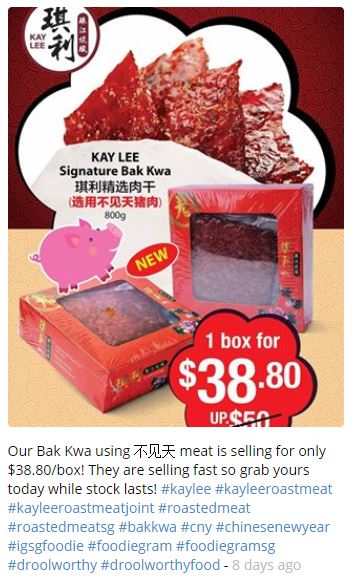 Indeed by the Roast Meat guys.
Posted by PengYou at 8:38 AM No comments: 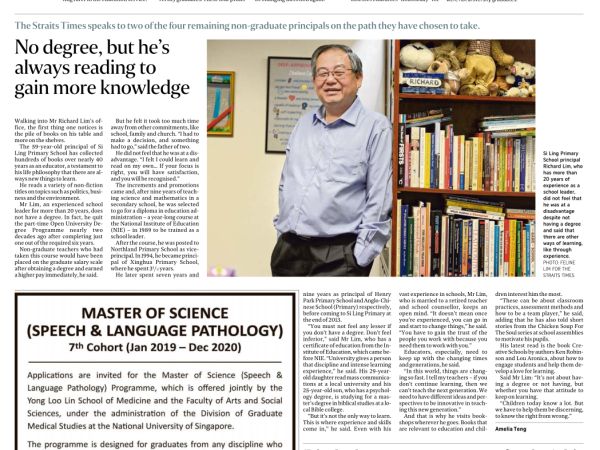 I enjoyed working with this principal many years ago. How time have passed both of heads are now full of gray hair!

He was unlike any other principals I have met, very open minded and innovative. I didn't realized how different he was until I had to work with his successor, who was a good fellow as well but more in the mold of a government servant.

Posted by PengYou at 8:28 AM No comments: 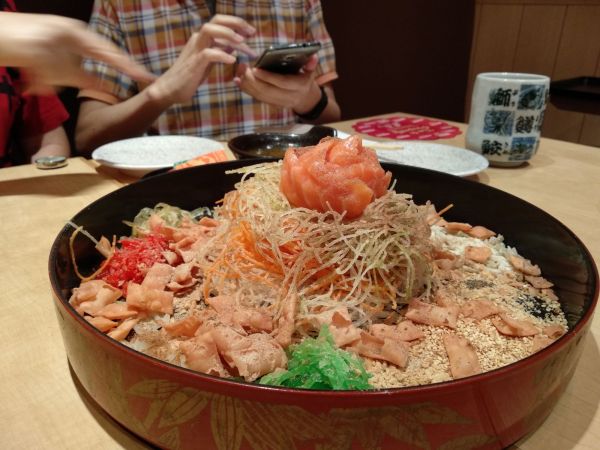 Had our first Yu Sheng this afternoon as usual at Ichiban Sushi.

I think they have upped the price from $28 last year t o$29.80 this year. On the other hand quality has gone up. We will be having this many times before the new year is over.
Posted by PengYou at 9:28 PM No comments:

CHC: Won the legal but lost the moral case 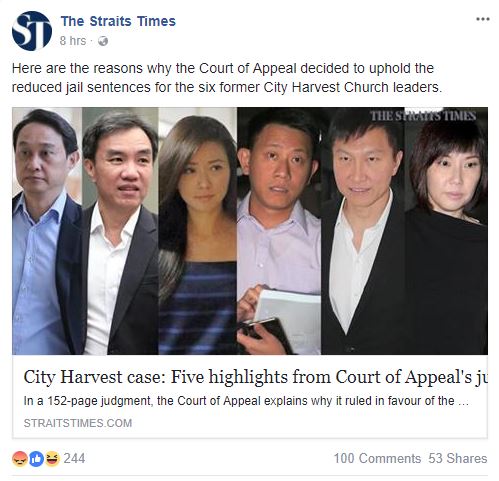 I went over the five points, reviewed the comments and obviously we have to agree with the judges judgement on this matter. Now Parliament must act to update the law on this matter. The public will ask why just like the floods, we are being reactive and not proactive. That it is very hard to be proactive and easy to be reactive is not an argument many people here are willing to accept when government leaders are so highly paid. 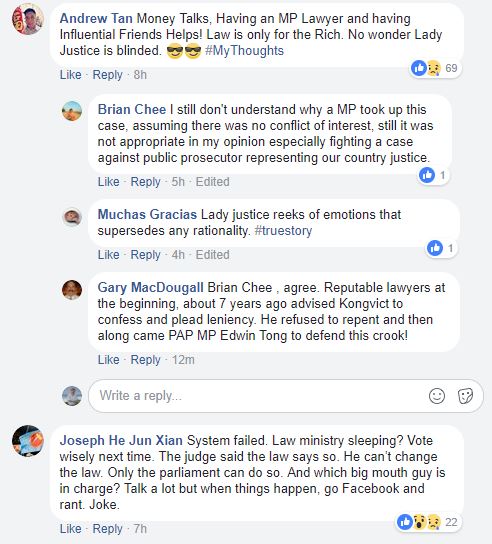 Shanmugam and his ministerial colleagues should not have bothered to appeal and instead should have gone ahead to change the law through parliamentary action. That would be the takeaway for any reasonable person reading how the five judges thought.

In this town people think the government is proactive about protecting and promoting wealth and the rich but reactive about our needs and worries. This is but only the latest in a long line of examples. Think MRT, floodings, pedophilia, human trafficking, road accidents and hospital beds.

We are not lawyers and why should we be? At the end of the day lots of people go away with the perception albeit unfairly that there is one law for the rich and another for the rest of us. This is bad and clumsy politics. The lack of accountability creates falling standards.

Sure the government will fix this one between section 406 and 409. What about other laws? That we would get to learn about another time when the moral equivalent of the CHC case appears.

Khong Hee and gang now serve a much shorter sentence. They will worship and praise God in their huge cavern over this. That is the second insult. 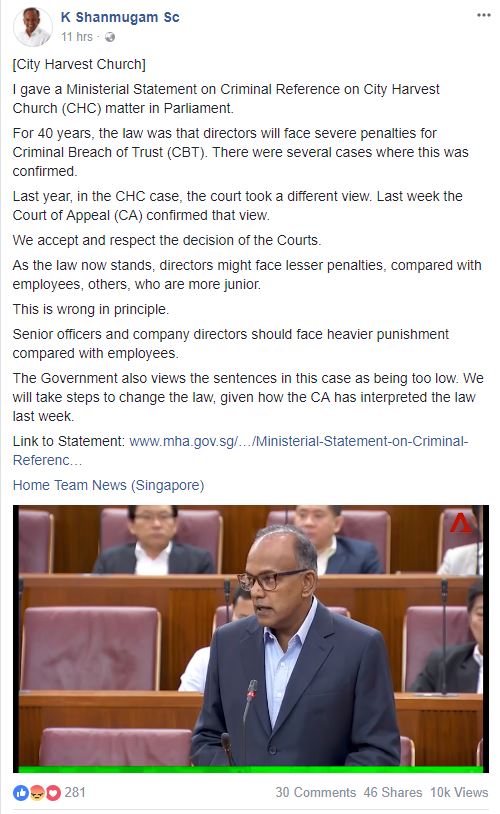 For 40 years, the law was that directors will face severe penalties for Criminal Breach of Trust (CBT). There were several cases where this was confirmed.

That is practically alluding to had the case been not a church but a business organization, the five would have been sentenced differently. The government expected that but it did not happen. Why? Well what is the difference between a church and a company which caused the judges to view this differently. On the other hand the public by and large is with the government on this matter.

Trump and meaning of words 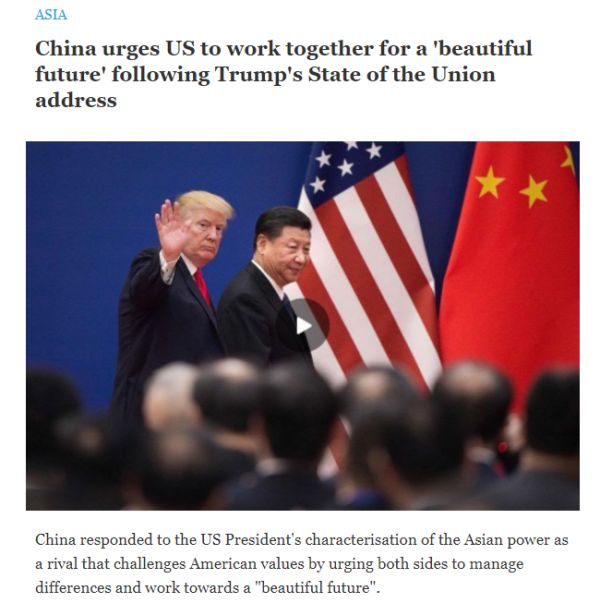 China is probably among the first to learn how to discount Trump's vocabulary. Only someone like Trump would no recognize the irony of a "beautiful war". No war is beautiful, not even when nobody dies because the loser will still have many indirect deaths. Just ask the Russians who were defeated in the Cold War.

Only an idiot says there is such a thing as "beautiful, clean coal"
Posted by PengYou at 9:21 AM No comments: