He was the good doctor who saved my life. While serving national service, I was diagnosed to be suffering from a serious kidney ailment. The government doctors weren't able to help much; in fact for a while they thought there was nothing wrong with me, but Dr. Wong insisted that I pressed my case. I did and eventually a painful renal biopsy confirmed my condition and they duly downgraded me. What if I had not me Dr. Wong. I would probably be on dialysis today or as likely died from renal failure.

Dr. Wong treatment was really simple. He put me on Penicillin V for a whole year, monitoring every month.

What amazed me was when I first saw him, all he needed was a blood test and he could guess what I was suffering from. SGH did countless tests and found nothing. He predicted that the renal biopsy would be positive.

As far as I know, his extraordinary skills aren't passed to subsequent generations, or not to many. What a huge loss.

What the newspaper article said about his medical skills is completely true.
Posted by PengYou at 3:27 PM No comments:

The following was the introduction accompanying this YouTube movie.


"This is an AFP video about a 76-year old street scavenger in Singapore who became homeless after paying for her late husband's medical bills. In Singapore, medical expenses receive only 36% subsidy compared to 50%-80% for other developed nations."


I suspect the picture isn't so simple. While I sympathise with this 76 year old lady and inumerable others like her, I wonder how the picture might be different if we provide subsidies like other developed nations. The rampant waste, abuse and poor accountability of welfare funds in these other nations would overall make it worse for us.


The plight of this 76 year old only shows that we must continue to work harder and get better at helping our under class. Copying the other nations is not a good place to begin looking to improve the current situation.
Posted by PengYou at 7:33 AM No comments:

Christianity: Performance vs Being

Christianity is not about performing, which I understand is the case for all other faiths. Instead it is about being - the new creation. The trouble is we cannot avoid the urge to perform, i.e., to do good works, carry out certain rituals, which may include pilgrimages etc.,
As for being, it is achieved by faith. The performance is the evidence of faith and not the reason for it.
You do not need to be a new being to perform, but a new being will have performance. As that newness grows and asserts itself with time and maturity, a greater performance is evidenced.
This makes Christianity very easy to fake as it is often easier to perform than to become. The new being demands crucifying self to the cross, which few are willing to do. God is gracious and will wait but clearly there is no point in waiting for everyone.
Posted by PengYou at 10:40 PM No comments:

Email ThisBlogThis!Share to TwitterShare to FacebookShare to Pinterest
Labels: christianity

I wouldn't be surprised if Nokia fails to beat Apple on the iPhone. Steve Jobs has the uncanny ability to know which desirable product feature to take away in order to make the overall product much superior, e.g., the iPhone has no user replaceable battery buy in return in creates flexibility for the designers to make them as you see it now. Can Nokia do this especially if you get a committee on such tasks? Unlikely.
Posted by PengYou at 11:41 AM 1 comment:

It is the news all over the place. America deficits will keep growing for the foreseeable future and in about ten years time, it will balloon to about $9 trillion, which at this rate they will never have the strength to solve but to debase their currency.
Perversely, the bond markets today basically ignore the news. Everyone is more preoccupied with the immediate now.
There are so many things for the markets to worry about later that it just might choose to ignore it. The Market might be failing because we are failing. Would this be the way that we come apart? I hope not, but it no longer need any stretch of the imagination to think so.
Posted by PengYou at 10:32 AM No comments:

Cheapo Bicycles make sense for us 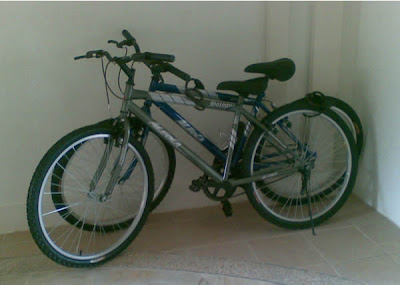 Bought them about a week ago from Giant Hypermart. Each of them cost less than our car rack, about $60. Only single gear which is just as well since we almost never shift the gears when we ride at the East Coast PCN anyway. We leave the outside our apartment betting that some cheap and simple bikes aren't worth stealing. If they were really gone, we wouldn't hurt us. On the other hand, we can start our weekly cycling at least an hour early when the weather is still cool. Even better we can save on the pricey bike rentals.
Posted by PengYou at 10:38 AM No comments:

Leadership is easy when you have no choice. I just saw a news flash that Obama is going to nominate Bernanke for a second term. Imagine what it would be like if he didn't. A few months back, the Chinese injected billions into their economy because of the global financial crisis. Do you think they had a choice? They didn't. They just had to do it and worry about the consequences later. Now Wen Jiabao continues to worry publicly. Andy Xie is calling for the bubble in China to pop and his track record for calling these things has been quite good.
Asian stock markets have some, may be much to give up before they can be reclaimed again....
Posted by PengYou at 10:32 AM No comments:

Paul's letter to the Romans

At my daughter's request and time permitting, I am taking her on a weekly walk through Romans, two chapters at a time. My initial reaction to her request was this is a difficult book from the New Testament. At least, it isn't as confusing as the last book: Revelation.

Christians will always have to get back to the light in Romans again and again. The teachings in Romans will refresh the church and over time, she will veer off from the path and need to rediscover and return to it. The Reformation as initiated by the friar Martin Luther comes to mind.

If you think you have grown in faith because you have become even more aware of God's grace, come back and read Romans. Do not be surprised you learn a few more things from it, and this is not only for knowledge but have practical use as well. It will shift your attitude, change your heart.
Posted by PengYou at 7:43 PM No comments:

Internships are probably going to get more popular going forward. This could be one of the major changes to Singapore's job market for graduates after this deep recession. The pressure on these young people to help contribute to family incomes is also much less these days. Companies probably like internships as they help to mitigate the risk of bad hires.

I often tell my children that there is a very good chance that the jobs they will do in the future may not have been created yet. The basic skills needed would not have changed but the way you combine them and the type of relationships and teams you form or join could be very different.
Posted by PengYou at 7:38 PM No comments: