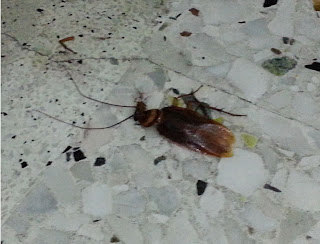 Destroyed the fifth and I hope the last cockroach of 2012 tonight. The kids spotted it scurrying across the floor when we returned from dinner.

In 2011 there were only three such incidents. I hope I am not seeing a rising trend!
Posted by PengYou at 8:57 PM No comments:

The sacrifice of the four PRC bus drivers

Many responses but Nicholas Chin post attracted 35 likes. I agree with him.


As long as the job market is very tight employers are afraid to treat workers badly. Since we opened our labour markets we created a situation where the job could remain tight but also employers perversely could treat their employees badly and get away with it. Therefore laws that give management the advantage, de-fang the unions who go on pretending they have so much influence do not work. Well the Chinese started striking first because they couldn't take it any more. If not for them locals will eventually do the same when their work conditions become more severe.

The four might have broken our laws but the Chinese will see our law as unjust. Legal but unjust. Bear this in mind.

I think we have many unjust laws which most of  us have learned to live around to the point we no longer become conscious of them because they are so ingrained. Time will tell that this is a very bad idea. The sooner we rethink and adjust the better. Basically Singapore tried to pour new wine into old wine skins and it burst.

I must add this too. SMRT  is a horribly run company. Because of their incompetence, the whole nation reputation suffered. I am amazed their LG Desmond Kuek chief failed to grasp the gravity of the situation and rushed back from overseas leave and show leadership. I think the board and its chairman do not even know how to select the right person to run the company. They look so bad against SBS and I think the entire board have to be replaced.
Posted by PengYou at 9:35 AM 6 comments: 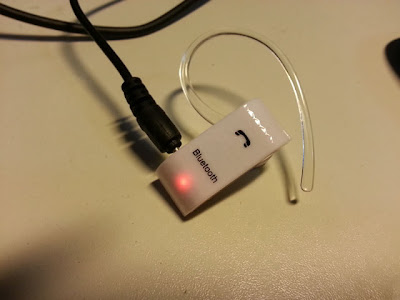 The Bluetooth ear piece I bought on November 8 from eBay has arrived from China. Cost me only US$ 3.78. Now conditioning its battery. Will know soon how good it is.

This little thingy works and even better than my old one which cost ten times more. Faster to turn on and the flashing blue LED tells you it is turned on.
Posted by PengYou at 8:08 PM No comments:

Only just got the chance to read the ST today and found this on page B19. Earlier this morning around 9 am I responded to someone who sent me this, "(BN) Olam Nears Distress as Muddy Waters Takes Aim: Corporate Finance"

You don't have days! I am underwhelmed by our fund managers. You better up your game. Just as well I don't buy their funds.

Around 1 pm Olam's made available their rebuttal on their website. I only read the first 15 pages of Muddy Waters report but scanned through more than half of Olam's rebuttal paying special attention to their solvency and capex.

As I am not a full time investor, I would avoid them. Something tells me that Muddy Waters had caught them too soon. Come back a couple of years or more later you might find a crime. Too early, too soon Muddy.

In the short term Olam is not going belly up. Bond holders with near term maturities are safe.


Olam Nears Distress as Muddy Waters Takes Aim: Corporate Finance2012-11-27 22:40:12.976 GMT     (For more credit market news, click on TOP CM.)By Shruti Date Singh and Sridhar Natarajan     Nov. 28 (Bloomberg) --- Bonds of Olam International Ltd.are approaching levels considered “distressed” after researchfirm Muddy Waters LLC likened the world’s second-largest ricetrader to Enron Corp. and said it’s likely to fail.     Olam’s unrated $500 million of 5.75 percent, five-yearnotes issued at par in September have tumbled to 86.5 cents onthe dollar to yield 9.3 percent, according to prices compiled byBloomberg. Yields on speculative-grade bonds worldwide havecontracted 0.2 percentage point in the same period, Bank ofAmerica Merrill Lynch index data show.     Muddy Waters, founded by short seller Carson Block, ratedSingapore-based Olam a strong sell in a 133-page reportpublished yesterday. The research firm says Olam uses non-cashaccounting gains to boost its earnings, has been “burning cash”and will need to raise or refinance as much as S$4.6 billion($3.8 billion) of debt over the next year to remain solvent.     “There is just a lot of uncertainty around the name and Ithink right now simply nobody knows whether Olam or Muddy Watersis right,” Markus Bossard, a money manager at Mirante FundManagement SA, said in a phone interview from Zurich. The firmoversees about $440 million in its funds, including Olam’s debt.     Bonds yielding 10 percentage points or more over U.S.benchmarks are considered distressed; five-year Treasuries yield0.66 percent.                       Conference Comments     The yield on Olam’s bonds are closer to the 11.2 percentaverage for debt rated CCC than the 6.36 percent for securitiesgraded one tier higher at B, according to Bank of AmericaMerrill Lynch indexes.     Average yields on junk-rated notes, ranked below Baa3 byMoody’s Investors Service and lower than BBB- at Standard &Poor’s, are 7.04 percent, after reaching an all-time low of 6.84percent on Oct. 18, according to the Bank of America MerrillLynch U.S. High Yield Master II index.     With borrowing costs on speculative-grade debt hovering atabout record lows, the number of companies in the Bank ofAmerica Merrill Lynch U.S. High Yield Distressed Index hasdeclined to 237 from 1,475 at the height of the credit crisisfour years ago.     Block first publicly questioned Olam’s accounting methodson Nov. 19. He told an investment conference in London that he’d“shorted” the company’s stock, seeking to profit by sellingborrowed shares now and buying them back later at a lower price.The 5.75 percent notes dropped 7.2 cents to 89.8 cents on thedollar on Nov. 20, Bloomberg prices show.                          Olam Lawsuit     Muddy Waters published a statement on its website aboutOlam on Nov. 20. Block’s remarks were malicious falsehoods, Olamsaid in a lawsuit filed in the Singapore High Court on Nov. 21.     Briony Mathieson, an Olam spokeswoman, declined to commenton the company’s bond performance and said the company isreviewing the Muddy Waters report. Olam said in a statementyesterday that after an initial read, the reports’ allegationshave no substance.     The shares dropped 9.8 percent to $1.19 in over-the-countertrading in New York yesterday. They have declined 10 percent inSingapore since Block first talked about his short position.     Olam supplies 21 products from cocoa to rubber from 65countries to 12,300 customers. It’s one of the world’s top sixcotton traders. Singapore’s state-investment company TemasekHoldings Pte. is Olam’s second-largest shareholder with a 16percent stake, according to data compiled by Bloomberg.                       Acquisition ‘Binge’     The company runs the risk of failure because of anacquisition and capital expenditure “binge,” Muddy Waters saidin its report. Most of the deals the firm said it researched are“low-quality assets that appear to bring little more thancosmetic benefits to Olam,” according to the report.     “It is instructive to view Olam through the lens of failedU.S. trader Enron,” Muddy Waters said in the report. “Thereare a number of material similarities in the way theirbusinesses developed, and their actions.”     Enron, once the world’s largest energy trader, plunged intobankruptcy in December 2001 following revelations it was usingoff-balance-sheet vehicles to hide billions of dollars in lossesand inflate its share price.     Olam spends on assets and records non-cash accounting gains“with the possible result being -- as in Enron Corp.’s case --the asset quality becomes less important than the potential torecognize accounting gains,” Muddy Waters said in the report.                         Operating Cash     Non-cash accounting gains were 37.9 percent of profit aftertax from fiscal 2010 to 2012, according to the report.     Of Olam’s S$1.1 billion cash position at the end of itsfiscal year on June 30, S$602.1 million appears to come fromOlam withdrawing margin from brokerage accounts, Muddy Waterssaid. Olam “seems” to have had only three weeks’ operatingcash at the end of the period, Muddy Waters said.     “The problem is it’s been burning cash the entire timeit’s been public, almost,” Block, the director of research forMuddy Waters, said yesterday in an interview with StephanieRuhle and Tom Keene on Bloomberg Television’s “Market Makers.”     Muddy Waters said it estimates the present value of Olam’sunsecured bonds at 14 to 33 cents on the dollar.     Olam said in August it’s targeting annual profit after taxof $1 billion by 2016, partly through acquisitions. Net incomein the year through June fell 14 percent to S$370.9 million.                           Olam Deals     Chief Executive Officer Sunny Verghese said in a Nov. 26interview that he stood by Olam’s debt-funded expansion and saidit’s not in the best interest of shareholders to abandonspending plans. Olam’s net debt of S$6.4 billion at the end offiscal 2012 was more than double the level four years earlier.     The company has announced acquisitions totaling at least $2billion in the last five years, Bloomberg data show. Olam hasspent S$571 million less on acquisitions than announced whileS$996.2 million has gone towards unattributed, non-acquisitioncapital expenditure, according to Muddy Waters.     “Bondholders in particular should be asking where theirmoney goes,’ Muddy Waters said.For Related News and Information:Olam’s risk profile: OLAM SP Equity RSKC Olam’s financial analysis: OLAM SP Equity FA1 Olam’s capital structure:: OLAM SP More corporate finance columns: NI CF --With assistance from Michelle Yun in Hong Kong and Simon Caseyin New York. Editors: Simon Casey, Faris Khan