Dengue is an incomplete story around numbers 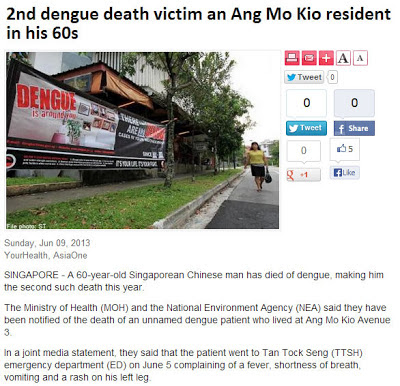 To me this is a story of numbers that is not completely told. Two dengue deaths out of nine thousand cases and this is not counting those who had the fever but no measurable fever. Simple probability of no worse than 0.02% How do you think most people would think?

He would think the chance of falling ill to Dengue is small and it is likely that someone else who would die rather than him. To me this is what make the problem so difficult to eradicate. We have a false sense of safety.

What mozzie wipe out? The story and danger must be much better told.

And my simple probability calculations is wrong because it grossly oversimplifies the story. We are actually looking a situation with a potential of going exponential or in layman's terms ballistic. This risk is not widely made know to the population. Not a bad idea to frighten people a little with the truth.

We can't win this one unless we work together.

Heard on the radio this morning. The doctor advised drinking lots of water. The facts of Dengue infection is such that you can't confirm you have it until some days later and for some this is just too unfortunately too late. Also unless you are so sick to need equipment in ICU or high dependency, a hospital stay is not necessarily better than remaining at home. In the end, taking care of yourself is the best defense.
Posted by PengYou at 9:33 PM