I find Chan Chun Sing's reasons for not agreeing to a poverty line facetious. If he were minister in MTI there will be many hard indicators across many activities and deliverables.

Setting a poverty line only serves to add and not subtract from what we are doing to help the poor. On the other hand other ministries probably have far too many indicators, KPIs etc., euphemisms for 'Poverty Line' as an indicator.

They famously repeated as convenient what you can't measure, you can't manage. Guess they don't want to manage poverty. It would be callous but sometime one wonders if the government would not privately wish the poor would die off quickly and cheaply because dedicating resources to them is like wasting money since there is no hard returns. I think their attitude is like the American Republican Party. If you are poor it is because you are lazy and may be stupid as well. If we have too many of them then the average IQ and competitiveness of our society goes down. Familiar LKY's logic but only he has the candor to tell it to our face and the unfortunate stubborn as mule attitude when the science lacks the conviction of the physical laws. We paid heavily for his prejudice.

We will continue to help the poor in our own ways but we must also always keep up the pressure on the government on such matters. Inclusiveness is a convenient and political slogan. If ever we stopped watching they will also stop including the weakest and poorest among us. That is why social media is so useful.

It is not true helping the poor has no returns. It is about being and staying human and giving ourselves a future. Its value cannot be quantified but is more quantifiable than the returns from the Youth Olympics and the F1. This government has its values in the wrong place. They are all invested in economics and engineering but impoverished in anthropology and I haven't even begin to talk about spirituality and investing in our souls. LKY thinks we don't have one. When you die, that is the end. I don't now what LHL thinks. Anybody cares to ask him?

Why the intangibles of taking the poor seriously far exceeds the Youth Olympics and F1.

A blessing of serendipity I come across this on my Facebook page. See full article at the Huffpost.

We can have our version of Danish society provided we first respect and enable our poor and weak. Just use your common sense. Can the Danish achieved their type of society by pretending not to notice the poor?

Huge continental size nations could not model themselves after Denmark but small states like us could. We cannot be their clone but they point the way to hope and give us faith that it can be done. We need to be mindful what is in our culture and politics that is preventing this. Remember our moral tank to keep going as before is nearly empty. 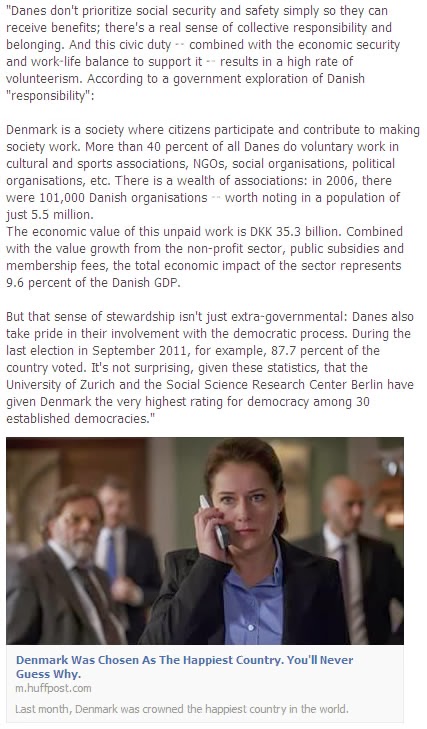