The fear is beyond Geylang.... 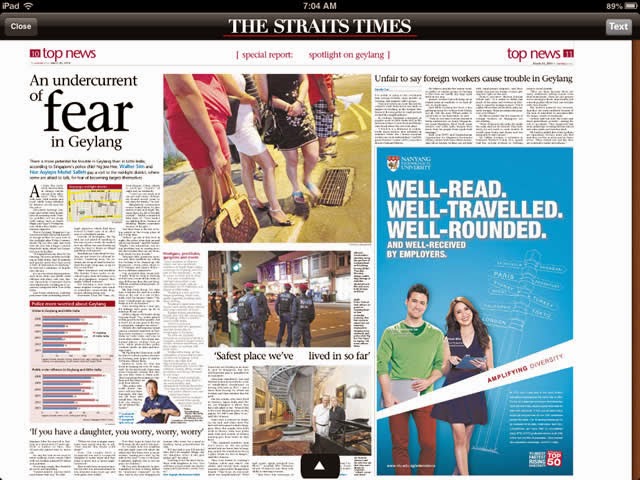 An undercurrent of fear in Geylang? I think they mean the fear at the periphery and beyond Geylang. If you must insist that there is fear in Geylang then I will concede that it is the men in blue that are afraid. It may be the only place in our small island where police officers risk getting a beating anytime they perform their duties.

So I wish the ST would be more to the point. We don't even need to visit Geylang to figure this out. But to suggest that the policemen are afraid in Geylang is terrible for public confidence, and better left unsaid and silently imputed by readers.

Now we have every reason to be angry why the Minister for Home Affairs allow the situation to deteriorate to such a sorry state. Wong Kan Seng and Ho Peng Kee have more to answer than the escape of Mas Selamat. Meanwhile what is Teo Chee Hean doing about this, and why didn't Jayakumar do something when he was the senior minister in charge of security? If they could brush off a Sylvia Lim questions on this subject, it is really telling us we need to install more Sylvia Lims in Parliament to keep the government more honest and responsible.

What's new in this article for someone who never go to Geylang? It is the thriving business ecosystem supporting an unhealthy nexus between the legitimate and the vice. In other words common sense or if you must systems thinking inform me that the problem will grow. The vice chiefs are patient people and will take their time to expand their business and territory. Many of them must be copying the "best practice" from other cities and practicing it here. Do we want to be like other cities with their criminal enclaves? Of course not!

If our leaders think the problem is local to Geylang, they cannot be more wrong. Don't even think of solving the problem when you have no idea how to stop their business from growing.