Really, SG is most expensive city? 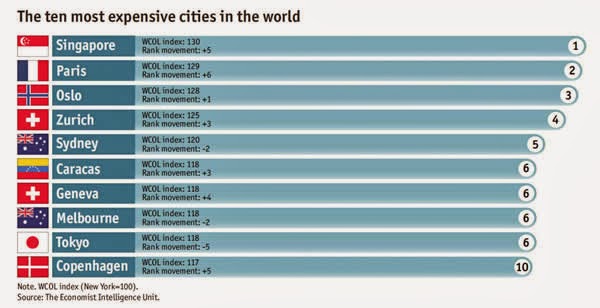 So much ado about us being the most expensive city in the world on cyberspace. My personal take is that this confirms our on the ground experience comparing Kyoto with Singapore in our recent holiday to Japan. Of course I thought in microeconomics terms then. When I see a chart like this, I immediately thought of Abenomics or else Tokyo would still be in the pole position.

This new disdained status was also discussed on radio this morning. An EIU economist explained that the ranking is not about the experience of the rest of us but how it directly impact expats living in these cities. Now for those of you who do not like to have too many foreigners here, shouldn't you take it as good news? And if the government want them here very badly then bring down the cost of living for them since they have so much power over costs.

We are one city but two economies: the rich and the poor. The middle class are painfully caught between the two because part of their living is in the rich space where they are regularly out bidden by the rich. I think that is why they are raising a hue and cry on social media and the blogosphere over our new most pricey city laurel.

Now trying not to own that one or two things the rich prized which you also use to show off helps. Wifey subordinates carry handbags that are may be ten times more expensive than hers.

Singapore as the most expensive city? Actually I don't really feel it but I also hate the accolade.