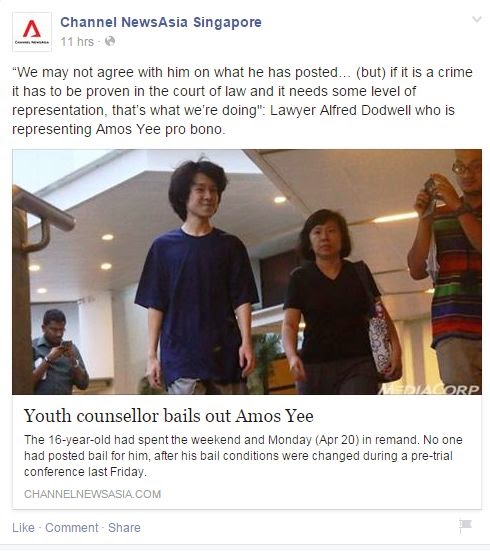 In an earlier post, I suggested that the best way to deal with Amos Yee is to ignore him. However the media just loved to milk him for eyeballs. It is just good business for them.

Now I think we shouldn't ignore Amos Yee because Vincent Law a parent and youth counselor just posted bail for him (CNA story). Vincent is also a Christian, i.e., the group Amos was publicly disparaging.

Unless Christianity gained political power, the faith is very familiar with verbal abuse and even persecution. Right now ISIS, Boko Haram and its evil brothers are hunting them down to be killed. In return the families of the murdered Christians ask God to forgive the murderers. Amos will have to try so hard beyond what he is capable of  to offend the Christians. The Christian Vincent Law is more interested to help him than take revenge on him.

Muslims share a common prophet with the Jews and Christians in Abraham. Those with evil crazy ideas of fomenting a theocracy by any means in a multi-religious society ought to consider how the way of Christ is superior.