The Economist Cover: The Gay Divide 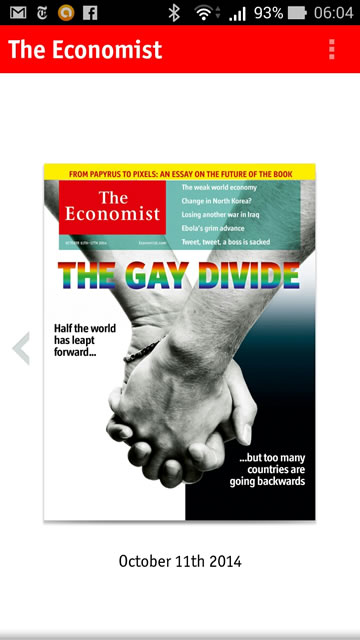 It being a Friday, my copy of the Economist was dutifully downloaded into my phone and tablets.

Oh, The Gay Divide? We have the divide in our midst too.

The Pink Dotters were making progress for several years and then Lawrence Khong and company tried to roll them back without much success. Pink the least war like of colors is the juggernaut and nobody here is strong enough to push them back except the government. Khong was always appealing to the government to act.

Then the silent majority made its voice heard over the issue of LGBT lifestyle with children books in our public libraries. The public have spoken and the government entered the fray.

Now the LGBT and its liberal friends or shall I suggest comrades have just used HCI as the battleground to ambush the conservatives. Good luck. If you play this too hard the silent majority will find its voice again.

Hong Lim Park is as big a place as the Pink Dot Movement is allowed. Can we allow them a larger space? Yes, but only if they learn how to do this right.

It is not possible to be whiter than the whites (I mean their opponents) but you can point out correctly the white aren't that pure and perhaps grayer than the pink. Hypocrites have no authority to go around judging sinners. Neither do they know how to love them without coming across as frauds.

A humble Christian leader declared not long ago about homosexuality, "Who am I to judge?" Actually he was given the authority to judge but his church lost it and he was courageous to recognize that fact.

There will be no divide when we stop judging and start forgiving.