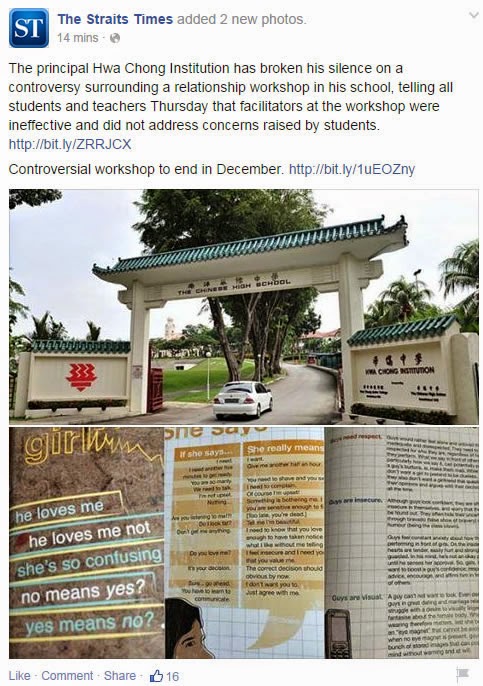 Agatha Tan played her principal like a fiddler. It was so easy there will be more like minded students giving him this royal treatment in future. This can be very tough to deal with as some of these students have misguided, highly educated and articulate parents backing them.

Of course, Agatha must have calculated that if she had simply written to him in private, at best the response would be slow if any.

In terms of military strategy, Agatha can be seen to have borrowed the elements to battle the system and get it to bend her way. Facebook was the instrument that could summon the elements to her aid. In a diabolical fashion, ISIL use religion to pull in the sacrificial bodies. The principle is the same.

What if another student pen an open letter and better yet with many fellow students signing off against Agatha's position? That is not happening given the astute response of the principal blaming a particular facilitator.  If so, and if he and MOE think there is nothing wrong with the program why is it going to be discontinued after this year? Personally I think that program is not suitable for the present reality.

To me, this principal is weak and lacks courage. Going forward every night when he goes to bed he must wonder if there would be another open letter to him tomorrow morning penned in the middle of the night eh?

I believe he is smart enough to know that the elements cannot simply be called upon. However is he confident that he is on top of every issue? The sexual and relationship conservatives and liberals have been seeking to battle each other whenever possible. Agatha simply invited the liberals to ambush the conservatives this time. Sadly this HCI principal chose to act blur and failed to discipline Agatha for her mischief. I am waiting for Heng Swee Keat to bring on the proverbial rod of discipline to Agatha.

Time to swap this one for a stronger principal. I think HCI deserve better.
Posted by PengYou at 6:55 PM